Discover exhibits from two millennia at the Bavarian National Museum

A visit to the Bavarian National Museum is a journey through European art and cultural history. Check out all there is to see in the impressive building near the river Isar.

Note: Bollert Collection: Thursday to Sunday: 10 a.m. to 5 p.m. | Crib Collection: Beginning of November - end of January during regular opening hours. For visits in the period from February to October please book in advance | closed: Whit Monday, All Saints' D The Bavarian National Museum at a glance

You can marvel at exhibits from two millennia in the Bavarian National Museum. During your tour you will roam through the following epochs:

The collections of the Bavarian National Museum

The core of the collection is formed by the royal art holdings of the Wittelsbach family - Bavaria's ruling dynasty for many centuries.

Another flagship is the internationally renowned sculpture collection. It provides a first impression of the range of German sculpture from the 13th to the 19th century and is complemented by major works from other European schools.

One wing of the museum houses the collection of Dr. Gerhard Bollert, a judicial councilor from Berlin. It is considered the last large German private collection of medieval sculptures.

In the specialized departments, visitors can marvel at fine porcelain, ivory, musical instruments, furniture, textiles, goldsmith's art and much more.

In the basement, the folklore department awaits visitors with a collection of nativity scenes that is unique in the world. On display are figurative Christmas scenes created in the Alpine region and in the crib centers of Italy between 1700 and 1900.

In twelve newly furnished rooms in the west wing, the National Museum displays some 1600 treasures relating to the pomp and luxury of the courtly world. The numerous porcelain and ivory figures, masterfully decorated jugs and collector's items from the courtly workshops are handcrafted works of art.

Early Meissen, Frankenthal and Nymphenburg porcelain, such as the figure "Dottore and Octavio from the Commedia dell'arte" (left in the picture) are among the highlights of the collection. Three halls alone are dedicated to fashion, clothing and accessories from the world of rococo and baroque. For example, visitors can see hand-painted cotton fabrics of the "Robe á la française", which was en vogue at the time, and extravagant men's skirts.

Exhibition "Did kids really play with this?"

In a small exhibition, the Bavarian National Museum is showing around 60 objects from its top-class, in-house toy collection. Selected toys from the 19th century are presented in the exhibition rooms next to the museum shop. The filigree, old pieces bear witness to the importance of their functions at that time and represent a cross-section of the playing preferences of well-off circles. Not infrequently the educational benefit was more important than the joy of play.

Events at the Bavarian National Museum

In addition to the classical guided tours, the Bavarian National Museum also offers workshops, lectures or seminars and concerts. Furthermore, every year in October the museum is one of the venues for the Long Night of the Museums. Children can celebrate their birthday in the museum's own "gold workshop" and immerse themselves in a particularly beautiful world. The gilder Ulrike Bläser M.A. demonstrates how shells or small baroque ornaments are covered with gold leaf. Then everyone is allowed to lend a hand, until at the end: There is a surprise!

Study again at age 50 or older

Who said old age is boring? The Bavarian National Museum offers a unique opportunity to those interested in art who want to study again and are already 50 years old: in the conference room of the Bollert Collection, art history is taught by the Winckelmann Academy. Even works of art from the museum itself can be used as study objects and free excursions can be taken. Neither a high school diploma nor an academic degree is required to participate.

The Bavarian National Museum is one of the great art and cultural history museums in Europe and dates back to its foundation by King Maximilian II in 1855. However, the building in Prinzregentenstraße is not the original museum: a first building was opened on October 12th 1867 in Maximilianstraße - today the State Museum of Ethnology. However, because this building showed massive damage after a few years and gradually became too small for the collections, the Bavarian Parliament decided to build a new building in 1892.

The Munich architect Gabriel Seidl designed the new museum in the style of historicism. On September 29th 1900, the new Bavarian National Museum opened on Prinzregentenstrasse, which today is one of the most important and original museum buildings. The architecture alone is worth a visit for its mixture of Romanticism, Gothic, Baroque and Renaissance. The interior design of the halls is also impressive, as it is individually adapted to the works of art.

Shortly after the opening, the new museum building in the north was extended by some halls and a workshop wing. During the Second World War, the Bavarian National Museum was heavily damaged. Bomb impacts led again and again to fires. After the end of the war, numerous reconstructions began, so that the public was able to visit the first halls again as early as 1947. In 1978, a complete renovation was ordered, in the course of which new workshops and studios were built on Himbselstrasse and Oettingenstrasse.

Up to the age of 18: free admission

Recommended length of stay: 90 minutes (without a tour)
Directions: Tram 16 or Bus 100 to the National Museum / Haus der Kunst, U4 / U5 to Lehel
Parking: Paid parking is available nearby 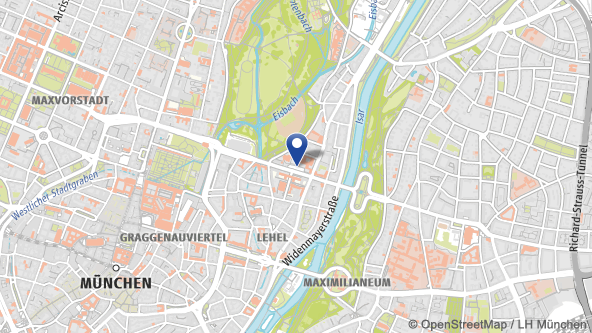