One of the last preserved city gates of Munich: The Karlstor

Karlstor at the Stachus: What you should know about the city gate and its history

The Karlstor at Karlsplatz (Stachus) is one of Munich's old city gates and today the western border of Munich's busy pedestrian zone. The Karlstor at a glance

People often hurry from Karlsplatz through the gate onto the shopping mile of Neuhauser Straße without turning their gaze upwards. Yet the Karlstor tells Munich's city history and is a sight in itself.

The four so-called collar heads in the central vault of the Karlstor commemorate outstanding Munich personalities:

The Karlstor, formerly called Neuhauser Tor, was built next to the Sendlinger Tor and the Isartor in the course of the second city fortification in the 14th century. In the course of history, it was repeatedly expanded and rebuilt. It has been called Karlstor since the Falcon Towers were rebuilt under Elector Karl Theodor in 1791, when the Stachus was also given the name Karlsplatz.

In 1861 the gate was redesigned in Gothic style, the last change was made in 1902 by Gabriel von Seidl in the course of the construction of the adjacent Stachus roundel.

After damage during the Second World War, the Karlstor was rebuilt in a simplified form. 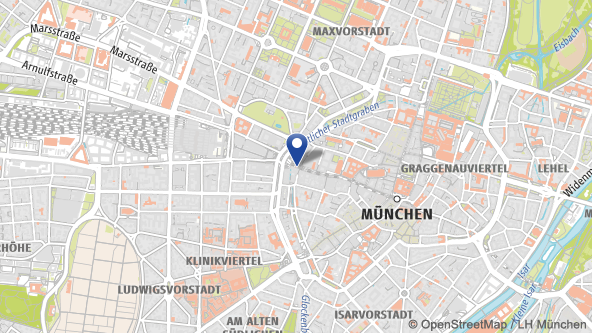