The Lenbachhaus is famous for the world's largest collection of art by the "Blaue Reiter" (Blue Rider) group, around Franz Marc. See what paintings you can discover here. The Blaue Reiter is synonymous with a group of avant-garde artists at the beginning of the 20th century, founded by Wassily Kandinsky and Franz Marc. The exhibition of the same name at the Lenbachhaus includes works of art by great painters, including Franz Marc, Wassily Kandinsky, Paul Klee and Gabriele Münter.

The latter is to thank for the exhibition: in 1957, on her 80th birthday, she left 100 exhibits to the Lenbachhaus, including 25 of her own paintings, 90 oil paintings by her husband Kandinsky, about 330 of his watercolors and drawings, his sketchbooks, reverse glass paintings and prints, and numerous works on paper.

But also works by important artists such as August Macke or Marianne von Werefkin are among them.

Other collections of artists from the 19th and 20th centuries

The "19th Century" collection deals with the original focus of the Lenbachhaus. In the first decades, the gallery mainly collected and exhibited works of 19th century Munich painting and German art of the early 20th century.

The "Neue Sachlichkeit" collection, on the other hand, deals with art after the First World War. In demarcation to the preceding Expressionism, the artists of the 1920s and 1930s expressed their tendency of sober-realistic reproduction of reality.

In 1979, the acquisition of the work of the artist Joseph Beuys, who had neither his life nor his creative focus in Munich, was understood as a provocation but also as a sign of the collection's departure into new areas. Today, the collection comprises a large number of sculptures and installations from different creative periods of Beuys.

In the collection "Art after 1945", new art movements as well as new media such as performance and video art, as well as conceptual art are taken up and shown on the basis of exemplary artists.

The history of the Lenbach Villa

The painter Franz von Lenbach had a palace in mind when he decided to build a villa near the magnificent Königsplatz. Between 1887 and 1891, the L-shaped property was built, consisting of a studio wing and a residential wing. The historic garden in front of the building is inspired by the Italian Renaissance.

In 1912, the two wings, the studio and the main house, were connected. In 1924, Lenbach's widow sold both the building and parts of the inventory and artworks to the City of Munich. These established the first holdings of the Lenbachhaus art collection. In 1927, the city commissioned the architect Hans Grässel to build another wing of the building to the north, opposite the studio wing. Two years later, the Lenbachhaus was opened to the public.

The building called Kunstbau is attached to the Städtische Galerie im Lenbachhaus. It was opened in 1994 and is characterized above all by its special spatiality. The Kunstbau is located on the mezzanine level of the Königsplatz subway station and its layout is based on that of the subway station.

The unusual dimensions take into account the growing spatial demands of modern art. The works of contemporary artists such as Picasso and Kandinsky have already been on display here.

Reconstruction and extension of the studio: The cube

Since its reopening in May 2013, the former residence and studio of painter prince Franz von Lenbach has shone in bright splendor with its brass-clad new building.

All exhibition and event rooms have been made barrier-free and equipped with modern facilities. Inside the cube, a large foyer awaits visitors with the installation "Wirbelwerk" by light artist Olafur Eliasson. In the café and restaurant "Ella" museum guests can get a snack and enjoy a unique view of the Königsplatz from the terrace. 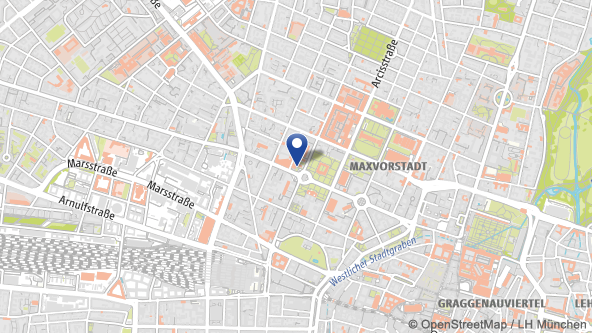