The Villa Stuck in Haidhausen: Information on museum, exhibitions and café

The Villa Stuck is not only one of Munich's most renowned museums, but also a complete work of art itself. It shows changing exhibitions in richly decorated rooms, which blend in with the ornate décor of the house. Why the Villa Stuck is a must-visit

The former home and studio of Franz von Stuck, a very famous artist of his time, in Munich has been open to visitors since 1992. The Art Nouveau villa houses a museum that is definitely worth visiting. These are the highlights in the Villa Stuck:

There are also other events like artist talks, concerts, a summer festival, and including a kid's program well-fitted for families or group visitors as well. Every first Friday of the month also, it's free entry from 6 pm to 10 pm.

In the historic rooms of the Villa Stuck, many works by the master himself can be discovered, including paintings such as "Sin" and the "Guardian of Paradise," which is over two meters tall. But visitors also encounter numerous bronze figures such as the "Dancer" with the facial features of Stuck's wife Mary and the "Athlete", a self-portrait of the artist. The numerous pieces of furniture and wonders of interior design testify to Stuck's versatile skills. In addition to his works, other art objects of the 19th century and many contemporary artists are exhibited.

A tour of the rooms

The neoclassical and palace-like building of Villa Stuck was intended as a residence and artist's studio in one. Where once wild celebrations and heated art discussions took place, visitors now wander from room to room. The vestibule, the reception salon, the music salon, the staircase and the artist's studio can all be visited. Every detail bears the signature of Franz von Stuck. The villa combines elements from antiquity and Byzantium, the Orient and the High Renaissance with the modernity of the late 19th century. Even during Stuck's lifetime, it was considered an idiosyncratic piece of art.

The former studio of the famous painter is located in the center of the house and is more reminiscent of a small ballroom than a study. There is no trace of color palettes, brushes, empty canvases, or attempts at sketches. Tapestries, an elaborate parquet floor and the altar-like setup for Stuck's scandalous masterpiece "Sin" are just a few of the fascinating things to admire here instead. A wide window front offers a view of Prinzregentenstrasse. In this room, the painter worked and celebrated himself and his arts.

If you think you have seen everything after a tour, you are mistaken. Behind the villa, opens unto an enchanting artist's garden. On a stroll, visitors encounter mythical figures such as Dionysus or Zeus. The museum café has seats in the foyer as well as in the garden. The menu includes hearty cold dishes such as sandwiches and salads, as well as cakes and desserts.

How to get to Villa Stuck

The Villa Stuck Museum is located on Prinzregentenstraße in the Au-Haidhausen district.

Before you head home, it's worth taking a detour to the famous Friedensengel (Angel of peace) column, just a few meters down Prinzregentenstrasse. From there you have a beautiful view. It gives you an idea of ​​why the artist wanted to build his home and studio right up here.

How to get there: By bus 100 and tram 17 to Friedensengel / Villa Stuck or U4 to Prinzregentenplatz and U5 to Max-Weber-Platz.

More info about the Angel of Peace

The history of the Art Nouveau villa on Prinzregentenstrasse

The Villa Stuck was built in 1897/98 according to designs by Franz von Stuck himself. The then 34-year-old painter, graphic artist and sculptor had planned his future artist's paradise in every detail. From the shell to the details for the interior decoration - Stuck developed everything himself, including the artist's garden with its impressive figures. At the 1900 World's Fair in Paris, the villa's furniture was even awarded a gold medal.

The three-story villa building presents itself in a no-frills Art Nouveau chic. Two driveway ramps lead to a bronze entrance with a Medusa head under a portico. Stuck later added colored rectangular panels to the plain facade. Since 1992, the villa has served as a museum for the City of Munich. The premises were extensively restored and expanded.

Franz von Stuck (1863-1928) discovered earlier on, that the idyll of the Bavarian village of Tettenweis could not hold him. In Munich, he attended the Royal School of Applied Arts and the Royal Academy of Fine Arts.

He celebrated his first success in 1889 with the gold medal for his painting "Guardians of Paradise" at the Munich Annual Exhibition. Six years later he was appointed professor at the Munich Academy of Fine Arts, where he taught the likes of Paul Klee and Wassily Kandinsky.

In 1897, construction began on his greatest work, his villa on Prinzregentenstrasse. In 1906, he not only received the Order of Merit of the Bavarian Crown for this, but also the "von" in his name. He was elevated to the peerage by Prince Regent Luitpold of Bavaria. Even today, his name is synonymous with imaginative art and such a life. 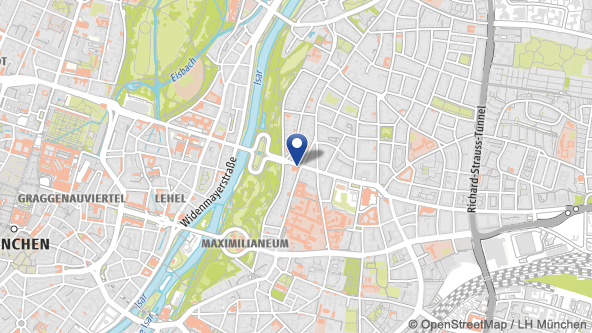