A diverse selection of attractions lure tourists and locals into downtown Munich. Kaufingerstraße and Neuhauser Straße are located between Marienplatz and Karlsplatz (Stachus). Munich's central pedestrian zone and the most important shopping area consists of two large streets, the Kaufingerstraße and the Neuhauser Straße, which merge into each other. The attractive fruit and vegetable stands and the creative street artists bring the boulevard to life, which attracts locals and tourists to go shopping.

Traditional department stores, drugstores, electrical, trend and souvenir shops are found between the most popular attractions of the city, such as Marienplatz, the Frauenkirche and Karlsplatz (Stachus). Small covered passages make shopping a pleasure even on a rainy day.

Traditional street with history and attractions

The Kaufingerstraße was first mentioned in 1316 as "Chufringerstraße", which makes its name on of the oldest street names in Munich next to the Rindermarkt.

During World War Two, it was extensively destroyed, restored and finally renewed with post-modern architecture at the turn of the millennium.

Thanks to the construction of the S-Bahn service for the Olympic Games in 1972, the inner city today is free of cars.

You can pleasantly combine culture and shopping in this historic area. Starting at the Marienplatz, one can admire the Old Town Hall (Altes Rathaus), reach Munich's famous Frauenkirche through Kaufingerstraße and Liebfrauenstraße and stroll along Neuhauser Straße to the large medieval city gates at Karlsplatz (Stachus). Take a seat and relax at the large fountain at Stachus and continue your shopping trip at the expansive Stachus underground passages. 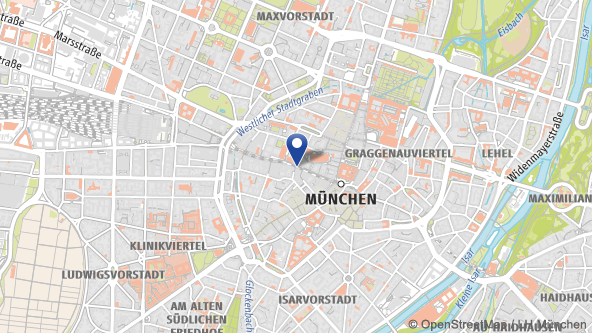