Odeonsplatz Munich: Information about the square, Feldherrnhalle, church and Residenz

Odeonsplatz is one of Munich's most beautiful and impressive squares. Many top sights can be found here. Also, Odeonsplatz marks the starting point of the famous boulevard Ludwigstraße. What you must see at Odeonsplatz

Odeonsplatz is both the northern boundary of the pedestrian zone and the starting point of Ludwigstrasse. Many of Munich's top sights are located directly at the square:

The classicist building of the Feldherrnhalle is impossible to miss, since it dominates the southern end of Odeonspatz. It offers a beautiful view of Odeonsplatz and Ludwigstraße and its steps are a perfect meeting place on sunny days. The building itself is a replica of the Loggia dei Lanzi in Florence.

Commissioned by Ludwig I, it was completed by famous Munich architect Friedrich von Gärtner in 1844 and erected in honor of the Bavarian army. Two large marble lions stand guard at the staircase. Inside the hall, there are bronze statues of the militariy leaders Tilly and Wrede and the Bavarian Army Monument.

Learn more about the Feldherrnhalle here

On November 9, 1923, right-wing putschists, including Adolf Hitler, marched toward the Feldherrnhalle and were forcibly stopped by Bavarian state police. The shootout resulted in injuries and deaths on both sides.

After the National Socialists seized power in 1933, a memorial was erected on the east side of the Feldherrnhalle with the names of the killed putschists. An SS honor guard stood there day and night, checking that every passerby expressed his appreciation in the form of a Hitler salute. From then on, many Munich residents avoided this part of Residenzstrasse and turned behind the Feldherrnhalle into Viscardigasse, which at the other end leads into Theatinerstrasse. That is why this small alley is called Drückebergergasserl (shirkers' alley) by the people of Munich.

If you look to the left from the steps of the Feldherrnhalle, the imposing facade of the St. Kajetan Church, commonly known as Theatiner Church, builds up. It was built in the late 17th century in the style of the Italian late Baroque.

Particularly striking is the bright yellow exterior facade, which can be seen from afar. In addition to the two large towers and the mighty dome, the interior is particularly impressive: it is richly decorated with stucco work and Corinthian column elements and is mainly white.

More about the Theatiner Church

Directly on Odeonsplatz is the west wing of Germany's largest inner-city palace: the Residenz (Residence). With the pompous Hercules Hall, the Treasury and many historic rooms, it is a popular destination right in the city center.

From Odeonsplatz, you can reach two impressive courtyards of the palace: the Kaiserhof and the Kapellenhof. Among other things, you can see valuable art treasures such as royal jewelry or noble caskets. In the evening, classical and modern concerts often take place in the Residenz.

Everything you need to know about the Residenz

The Hofgarten, one of Munich's most beautiful parks, borders Odeonsplatz to the east and can be reached through the Hofgarten Gate, which is well worth seeing. The gate was the first building of the legendary architect Leo von Klenze. Behind it stretches an oasis of peace, for the noise of the city can hardly be heard here. In the center of the former Renaissance garden stands the Diana Temple.

In summer, musicians often play here, enticing Munich residents and visitors to dance. The flair of the park has long included the boules players who meet here regularly.

Learn more about the Hofgarten

What the name "Odeonsplatz" means

Odeonsplatz, but there is no Odeon to be seen - so where does the name come from? The Odeon was once Munich's most famous concert hall and stood on the northwestern part of the square opposite the Palais Leuchtenberg. Unfortunately, the concert hall was destroyed in World War II, except for its facade.

Reconstruction works managed to save it, but the Odeon was lost forever. The dimensions of the concert hall are nowadays visible through the covered courtyard of the Bavarian Ministry of the Interior, which has its headquarters here.

Along with Marienplatz, Odeonsplatz is one of the most important venues for concerts or cultural events in Munich: 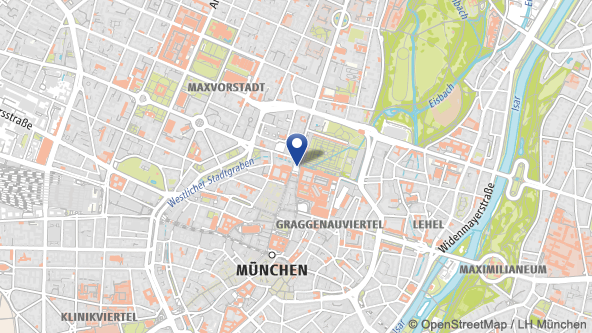