Westpark: A park for the family with theatre stage and beergardens

Why you should visit Westpark in Munich

One of Munich's most popular recreation areas, Westpark invites you to stroll and relax. Many works of art await you, while cultural areas and beer gardens make it an ideal spot for families. The 60-hectare park in Munich's Sendling-Westpark district was built in 1983 for the International Garden Exhibition. Peter Kluska's design was influenced by the landscape at the foothills of the Alps.

Artificial hills and valleys as well as two large lakes (Westsee and Mollsee) were also created. The Westpark is separated into two parts by the Mittlerer Ring, Munich's biggest inner city traffic road.

A must-see: The East Asian ensemble in the western part of Westpark

The East Asian ensemble in the western part is outstanding - a popular photo motif with original gardens and buildings in Asian style.

The park is also used for numerous cultural events.

The Westpark as an open-air gallery: works of art

During the 1983 Garden Exhibition, a handful of objects were placed in Westpark that were already envisioned at the time as enduring works of public art. A small selection:

Where can I play sports? Großparkplatz am Wirtshaus am Rosengarten 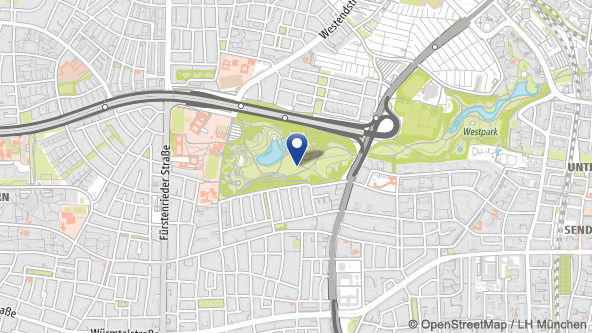