Bavaria's first baroque church in the center of Munich

Theatiner Church (St. Kajetan) at Odeonsplatz: All you need to know The ocher-yellow facade is one of the most beautiful in the entire city and dominates Odeonsplatz. It is completed by the copper roofs of the two 64 meter high towers and the mighty 70 meter high dome.

Church services in the simple interior

Upon entering the interior, most visitors are initially surprised. It is very simple in terms of color scheme, kept entirely in white. The spectacular thing about the interior, which was built in 1674 under Lorenzo Petri and Giovanni Viscardi, is the decorative design with massive columns, filigree stucco and the mighty dome 70 meters above the ground.

Of particular impact for visitors and during church services is the majestic high altar with its larger-than-life statues.

The Wittelsbacher crypt: This is where important nobles are buried

Alongside the Church of St. Michael and the Cathedral Church of Our Lady (Frauenkirche), the Theatinerkirche is one of the most important burial places of the Bavarian ruling dynasty of the Wittelsbacher.

A total of 49 members of the ruling family are buried in the Fürstengruft, including four electors, three kings, Prince Regent Luitpold and Emperor Karl VII.

The history of the Theatiner Church

Like Nymphenburg Palace , the Theatiner Church and the adjoining monastery were built in gratitude for a happy birth: The future Elector Max Emanuel had just been born when his mother Henriette Adelheid von Savoy commissioned the "most beautiful and valuable church" from the Italian Agostino Barelli in 1662.

Construction work began in April 1663. Due to violent disputes between Barelli and the construction manager, Enrico Zuccalli took over the artistic direction in 1674.

At the consecration on June 11, 1675, the Theatiner Church was still in the shell stage. It was not until 1688 that the nave was completed, the towers following in 1690.

Theatiner Church (St. Kajetan) at Odeonsplatz: All you need to know 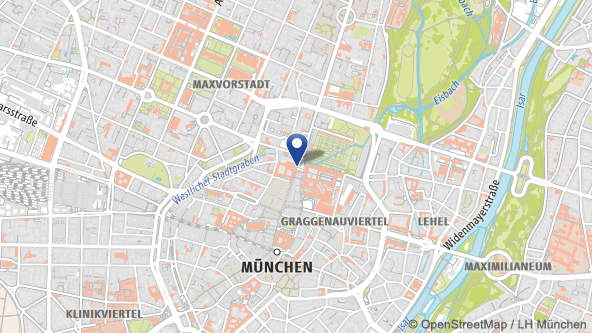