The Munich Residenz (Residence) is the largest inner-city palace in Germany. Why a visit to the former seat of Bavarian royalty is definitely worthwhile: In cooperation with the cultural department and the museums

This article about Munich's museums is sponsored by the Cultural Department of the City of Munich and was conceived in cooperation with the State Agency for Non-State Museums in Bavaria. The content has been coordinated between the participating museums and muenchen.de, the official city portal.

The Residenz: The most important information at a glance

The bronze halls of the Residenz contain over 40 original bronze sculptures from the late 16th and early 17th centuries, which are also opened to visitors several times a year.

The New Hercules Hall (Herkulessaal) was built on the site of the former Throne Hall. A monument of neoclassicism, it was funded and made possible by a donation of millions from the broadcasting company. To this day, more than 1,000 guests visit to listen to not only classical but also modern pop concerts.

Of course you can also marvel at expensive works of art - in Munich's best-kept rooms, the  Treasury of the Residenz. Many a visitor will have secretly wished to wear the crown of the Bavarian kings on his head at least once in his life.

Under Bavarian King Ludwig I, the Residenz took on its present appearance. By 1842, the mighty building on Max-Joseph-Platz , its counterpart in the Hofgarten (Court Garden) , as well as the National Theater and the Court Church had been built.

The representative royal apartment of Ludwig I is one of the highlights of the tour.

The Hofgarten with the round Diana Temple in its center celebrated its 400th anniversary in 2013 and is one of the most popular places to stay in downtown Munich - which is mainly due to its enchanting ambience. One of the most magnificent sequences of rooms in the Munich Residenz was built during the Baroque and Rococo periods.

An extremely important extension was built by 1753: The Cuvilliéstheater.
Vivid red and lots of gold dominate the four-story gem, where concerts and smaller operas are still performed today.

The Residenztheater on Max-Joseph-Platz has a more modern design:
Built in 1951, the venue now seats more than 1,000 spectators.

History of the Residenz: From fortress to Renaissance palace

The starting point of the Wittelsbacher Residenz was the Neuveste, a Gothic moated castle dating from 1385, which grew to immense size over the centuries in the northeast of the city center.

The first building of the new residence on the Neuveste was to be the first museum north of the Alps: The Antiquarium, completed in 1571. Further parts of the palace followed shortly after that. The Brunnenhof court also dates from this period. The Neuveste had to give way to the ornate Renaissance castle to make more room.

During the bombing nights of the Second World War, the Residenz was badly damaged and lay partially open except for the first floor. However, the city palace was successfully rebuilt within a few years after the war ended.

Opening hours for the Residenz in Munich

Opening hours for the Residence Museum and Treasury:

Accessibility and offers for people with disabilities

The Residenzmuseum and Schatzkammer are only accessible via numerous steps and are unfortunately not barrier-free. The Cuvilliés Theater is accessible without barriers.

History and architecture: from the fortress to the Renaissance castle

The "Neuveste", a gothic moated castle dating from 1385, originally stood on the site of the residence. From 1508 to 1918, the Bavarian princes expanded it into a magnificent residence and seat of ruling 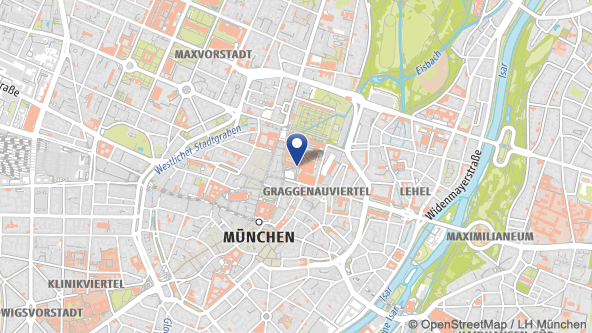