Marienplatz in Munich's old town - what makes it so special

Munich's Marienplatz with the New City Hall is the world-famous center of the Bavarian capital. Here is what you can discover at Munichs central square.

Video: Marienplatz is so beautiful

The Marienplatz at a glance - the heart of Munich

Marienplatz is the center of Munich and the perfect starting point for a visit to the Bavarian capital:

The New City Hall and the Old City Hall

For a long time there was only one city hall on Marienplatz. When the second one was built, the architect Georg von Hauberrisser (1841-1922) caused confusion as to which was the old and which the new city hall.

The latter dominates Marienplatz today, but was only built between 1867 and 1909 in the older-looking neo-Gothic style. The Old City Hall, however, which closes off Marienplatz to the east in the direction of the valley, is almost 400 years older.

Since its completion, the New City Hall has been the seat of the Lord Mayor, the City Council and the city administration. The smaller Old City Hall still serves as a representative building, the large Gothic ballroom is used for ceremonial events such as symposia, commemorations or award ceremonies.

In the tower right next to it is the Munich Toy Museum with old model trains, stuffed animals, dolls, dollhouses and tin toys.

The best view of Marienplatz is from the very top:

Pictures from the Marienplatz The Mariensäule: The monument in the middle of the Marienplatz

In the middle of the Marienplatz is the Mariensäule, which is dedicated to St. Mary as the "patron saint of Bavaria". This adorns the more than eleven meter high column in the form of a figure of Mary.

Equipped with scepter and crown, holding the blessing Christ child with orb in her arms and with a crescent moon at her feet, she symbolizes faith and hope. The base of the column recalls the four plagues of the time: heresy (serpent), war (lion), famine (dragon) and plague (basilisk).

Elector Maximilian had the votive erected in 1638 in gratitude for Munich surviving the Thirty Years' War (1618 - 48). On November 7, 1638, the eve of the anniversary of the Battle of White Mountain near Prague (November 8, 1620), the Marian Column was inaugurated on Marienplatz (then Schrannenplatz). As a memorial and thanksgiving monument for the salvation of the country and the Princely House, the Marian Column is still a place of public worship and prayer.

The Glockenspiel: A moving history of the city

As the New City Hall shows, Munich's city history is closely linked to Marienplatz: every day, a special spectacle in lofty heights reminds us of Munich's eventful history since 1158.

Since 1908, the carillon with 16 figures and 43 bells has been reenacting the marriage of Duke Wilhelm V to Renate of Lorraine in 1568, when the Bavarian knight defeated his Lorraine opponent in a jousting tournament.

One floor below, the Schäffler dance. According to tradition, they cheered up the population after a terrible plague epidemic. The Glockenspiel is a must-see for most visitors to Munich.

The Marienplatz as the beginning of the pedestrian zone

Starting from Marienplatz, Kaufingerstrasse, Theatinerstrasse and Residenzstrasse, among others, are home to numerous stores and restaurants in Munich's pedestrian zone.

How to get there: Where exactly is Marienplatz located?

Events on Marienplatz: Christkindlmarkt and more

History of Marienplatz: The heart of Munich

At the time of the city's founding around 1158, Marienplatz was not much more than a tranquil street intersection. Here, the salt road, which was crucial for the founding of the city, met the road that existed between the much older villages of Schwabing and Sendling. It was precisely at this point, on Petersbergl, that monks settled and thus gave the young village its name: apud munichen - with the monks - Munich.

For many centuries, Marienplatz was Munich's marketplace. Merchants offered their wares there: eggs, flour, wine. And also fish. That's why the fountain on the corner of the Beck department store is called the Fish Fountain. It is a popular meeting place for all kinds of appointments. Very late, only in 1854 after the market moved to Blumenstraße, the square was given the name Marienplatz. Before that, it was simply called Markt, Platz or Schrannenplatz.

Until the years of the economic upsing in the 1950s, Marienplatz became more and more an overburdened traffic junction. The pedestrian zone did not yet exist, and in addition, several streetcar lines left from the square in all directions. They also shared the narrow streets of the old town with cars, buses, cyclists and pedestrians.

Without the construction of the pedestrian zone, in the course of the transformation of the city center in the late 1960s and early 1970s, Marienplatz would not have the character that characterizes it today: an (almost) car-free piazza, with many stores and restaurants, a place to linger and stroll.

The Marienplatz as birthplace of the Weißwurst

On Carnival Sunday in 1857, so the legend goes, the innkeeper-butcher of the restaurant "Zum Ewigen Licht" in the middle of Marienplatz runs out of sheep intestines for the bratwursts.

He has to resort to pork casings, which are too tough and too big for bratwurst. In a pinch, he fills them with the finished sausage mixture anyway. However, he does not fry the sausages, but scalds them in hot water, because he believes that the wrong casings could burst during frying. This is how the Munich Weißwurst was created, it is said. 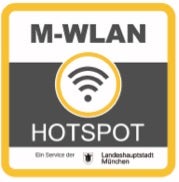 This could also interest you 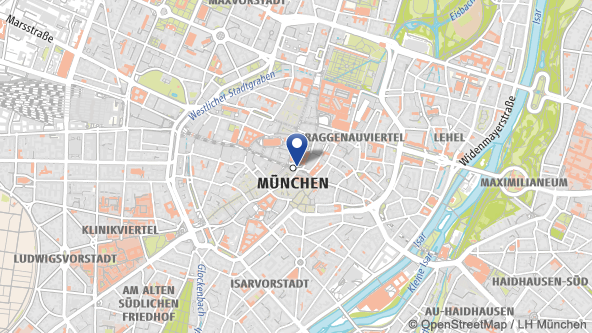